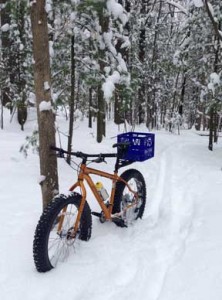 14 inches of snow on the race course for the Singletrack Showdown at the moment. Working on options.

We have two things going on during Global Fat Bike Day (December 7th).

In the morning is a group ride going point-to-point between Manistee and Camp Douglas-Smith on Hamlin Lake (direction will be determined a few days before the ride based on wind). We are shooting for two routes. One about 25 miles and the other about 35 miles. Both will have around 10 miles of beach riding and will be marked. The rest of the riding will be all trail, two tracks and a bit of gravel road. A shuttle will be provided back to the start location. Ride starts at 9am. Sign up for updates by emailing globalfattyday@mifatbike.com.

That evening is the Sleighbell Parade in downtown Manistee and fat bikes are going to feature in the parade. To ride in the parade you need to wear something Victorian or lumberjack-ish and be ready to have a great time. We are meeting by the post office on US31 around 5:15 and the parade starts at 5:30.

Hope to see you out for at least one of the events. Spread the word!

So it looks like Mother Nature is going to turn down the thermostat a bit for Saturday’s Global Fatty Ride. Predicted temps will drop to about 20 degrees for the ride and we may or may not have snow to ride on. The southern portion of the course got about 14″ of snow last week so it is tough to know how much of that will stick around or if we will get any additional snow of significance.

We are going to start the ride in downtown Manistee at the Outpost. They have lots of really good coffee there so we should be able to well fortify ourselves for the ride south. Speaking of which, it is highly likely we will have wind coming out of either the north or west so there is a good chance we should get a tailwind going down the beach. Hopefully it won’t be coming straight out of the west!

Currently the beach is in great shape. Not icy and really firm with a ribbon of snow to ride almost its whole length. That said, it is bound to be a lot different a week from now. There is a good chance it will be frozen and good riding on Saturday too but you never know with the beach.

There will potentially be a couple creek crossings while riding down the beach. Generally these are not bad and we will check flow rates later in the week to make sure they can safely be crossed. We have some options if the bigger creeks are flowing too much. Regardless, it is recommended that you use a waterproof boot for the ride if possible.

We will be finishing the ride at Camp Douglas Smith. This is an old Boy Scout camp right on the shore of Hamlin Lake. It is a really beautiful location. The approximate GPS coordinates are 44.078622,-86.417257. We will do our best to make sure a fire is raging so you can get changed and warm up after the ride. We should be able to have some food and beverages too! We are trying to line up a bag drop for warm after-ride clothing. Ideally this drop location will be the morning of the ride at the Outpost but we may have to push the drop-off deadline to the night before. More details to come on that.

We are still coming up with the exact routes but tentatively are looking at a shorter 16 mile version and a longer 35 mile route. The two will be the same for the first 12 miles and then will branch off. This seems like a good way to have a bail out option if the cold is getting to someone. More info to follow.

More details to come on the parade too.

Spread the word to anyone you think may be interested in the ride. Hopefully we can get a good crew together for the ride!!

Here are some basic details for Saturday’s ride:
9am start time from the Outpost in downtown Manistee. There is a parking lot behind the shop that will be a great place to park.
We have a shuttle setup to transport dry clothing, beverages and anything else (within reason) that you want post-ride. The bag pickup will be in the parking lot behind the Outpost but we will get things coordinated in the warm and caffeinated confines of the Outpost.
We have two ride routes established.
Here is a link to the short version: http://app.strava.com/routes/91607 – just under 16 miles
Here is a link to the longer version: http://app.strava.com/routes/91593 – just under 32 miles
The two routes follow the same route for approximately the first 12 miles.
There are lots of good cut-offs for the longer ride if the temperatures necessitate cutting it short.
We will have a fire going at the camp so people can warm up, get changed and hang out post ride.
There will be a shuttle for bikes and people back to the Outpost. We will play the timing of the shuttle by ear based on ride times and when people need to get going.
So far the snow is holding up and we should have some great riding!