I’m going to start this trail report with a little lecture from atop my lofty soap box, so if you just want the trail conditions, skip below the photo. Probably ought to add an exclaimer here… the following rant is a personal narrative from Andy Klevorn, the views expressed are solely those of Andy Klevorn and in no way reflect the official stance from the Shoreline Cycling Club, yada, yada…

Grooming is a fairly time consuming and grueling endeavor most days. You have to get out of a nice warm bed, early, when it’s the darkest and coldest, before work, as most groomers have day jobs. And then it snows and you have to groom three times to get the trail back in good shape. And you get the trails in pretty good shape and then the groomer’s worst nightmare comes true.

And everyone on Facebook posts warnings about the thaw, and not to ride if a trail is slushy or you’re leaving a rut of any sort. And you get the guys who swear they ride their 2.35 tires with 4psi and tell others to go out and have a blast.

So you ride out the thaw, and try and time the groom so that the groomer doesn’t itself wreck the trail. And you turn into to the trail system full of hope that people have common sense, I mean, it can’t be any fun to ride through slushy trails. Maybe it is I don’t know. And then the first thing you see is this. 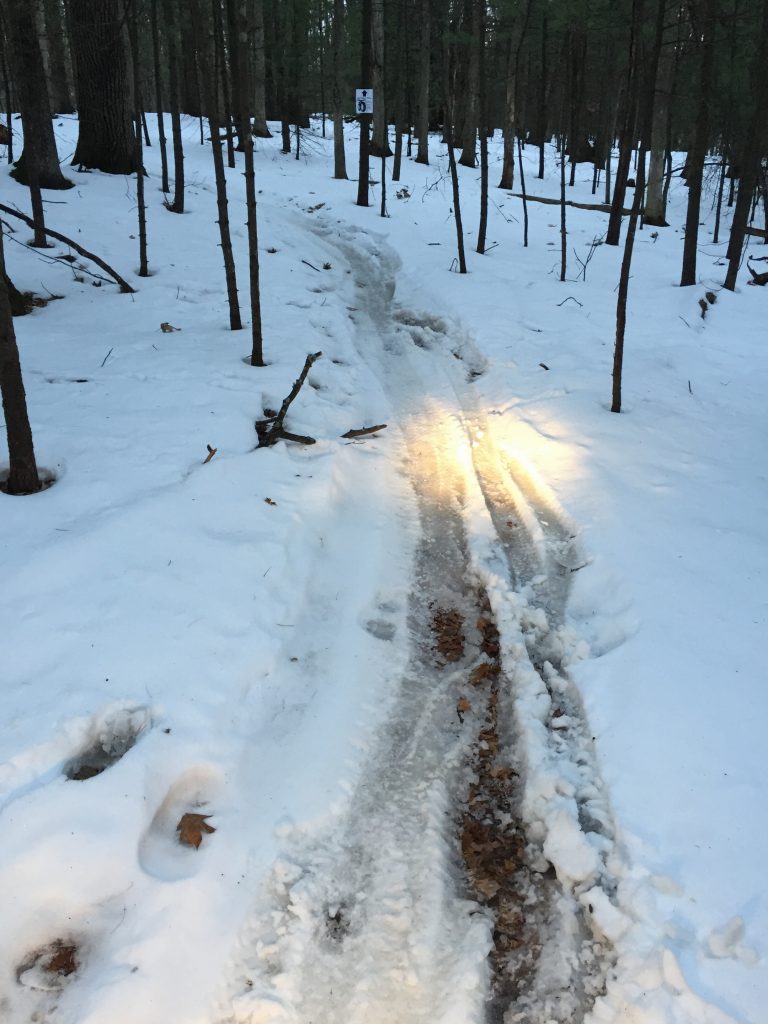 I’m not mad (okay, a little) but more disappointed in our efforts at education and, well, the level of common sense that some riders have. A picture is worth a thousand words, so I’ll save you the time of reading the next 900 or so.

The disc golf is pretty rough too, someone’s been going in there with a front end loader ( I kid you not) and so the two track up the middle has frozen front end loader tracks and I didn’t get out early enough and everything pretty much froze solid. So even with all of the weight from the groomer in the pan it was not enough to break up the foot prints, loader tracks and ski tracks.

It’s supposed to snow Friday, so hopefully it does and we can get out and make the trails great again.